Matthew Williams is a partner and practices in the firm’s Toronto office.

Matthew’s practice focuses on all aspects of taxpayer representation. He has appeared before the Tax Court of Canada, the Federal Court of Canada, the Federal Court of Appeal, the Ontario Superior Court and the Supreme Court of Canada on a wide range of issues. Matthew has extensive experience dealing with Canada’s general anti-avoidance rule (GAAR) in both domestic and international contexts having successfully appealed a number of cases in the Federal Court of Appeal. Matthew was named as a “Rising Star” by Lexpert® magazine in 2010 and has since been repeatedly recognized by Lexpert® as a Most Frequently Recommended Corporate Tax Litigator. Matthew has been recognized as a leading tax dispute resolution lawyer in the International Tax Review, was recently named among The Best Lawyers in Canada by Best Lawyers International, has been peer rated by Martindale-Hubbell as a “preeminent lawyer”, and is included in Chambers Canada Guide. 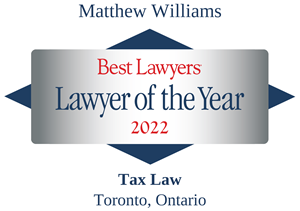